For a many years now we have had a tradition of eating oatcakes and blue-veined cheese with a glass of port in the evening during the Christmas and New Year period. Our port wine preference is for an LBV from W&J Graham. This wine is readily available, reasonably priced and very drinkable. Usually, we have Dunsyre Blue cheese but recently all of the Errington Cheese products have been withdrawn from sale. This year we have Hebridean Blue Cheese from the Isle of Mull Cheese company and very nice it is too. 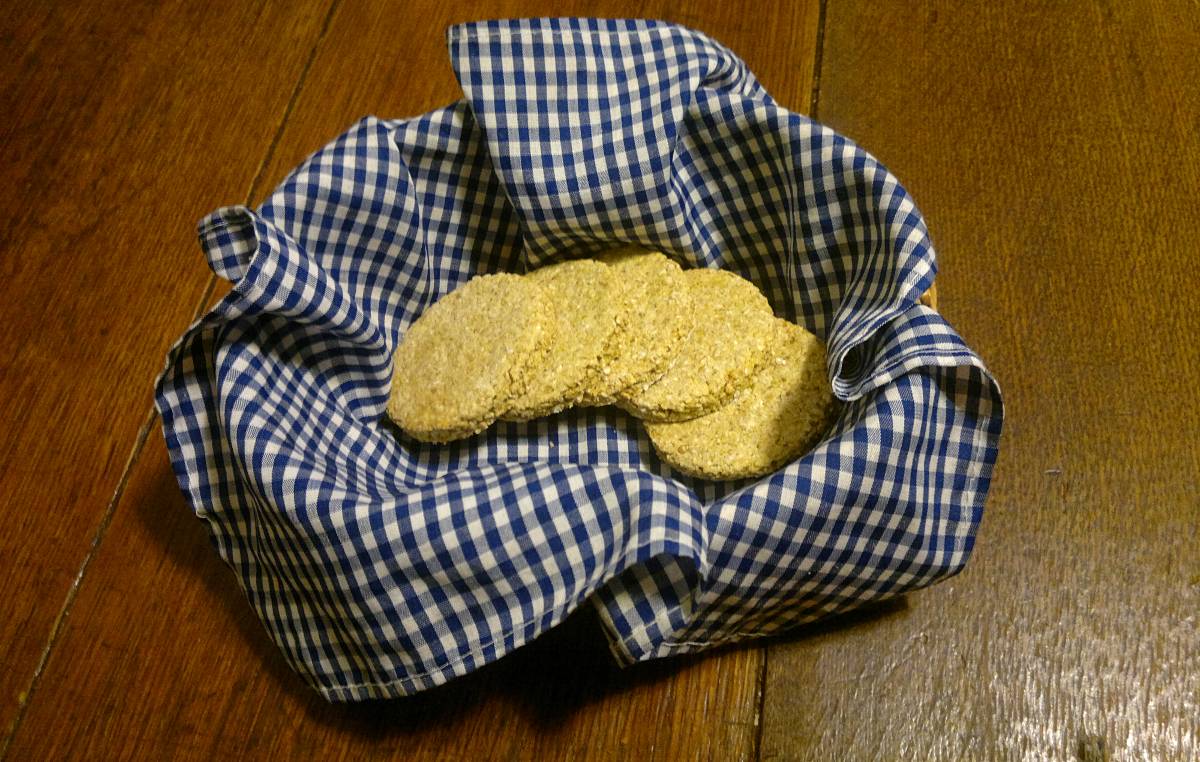 Aran-coirce is the Gaelic name for oatcakes

The real difficulty is finding an oatcake which is "just right". Most commercially produced oatcakes are too refined, too dry and too thin for our liking. The nearest we could find to our liking are the Thick Oatcakes from Stockan's Orkney Oatcakes but they aren't always available locally. If you can't find exactly what you want there is only one answer: make your own.

If you need a recipe for chunky oatcakes with a crunchy texture and not too dry you've come to the right place. Read on, MacDuff.

Ideally the oatmeal, and the equipment, should be at room temperature (~21°C) as otherwise it will significantly cool the other ingredients making it harder to form the oatcakes. For the same reason it is important to work quickly before the oatmeal cools too much.

This recipe's ingredients quantity and cutter size, should produce about 32 oatcakes but that is also determined by how thin you roll them out. Thirt-two oatcakes may sound like a lot but once you have eaten one the rest will disappear quickly. You could also halve the quantities in this recipe but why bother dirtying your equipment for just 20. 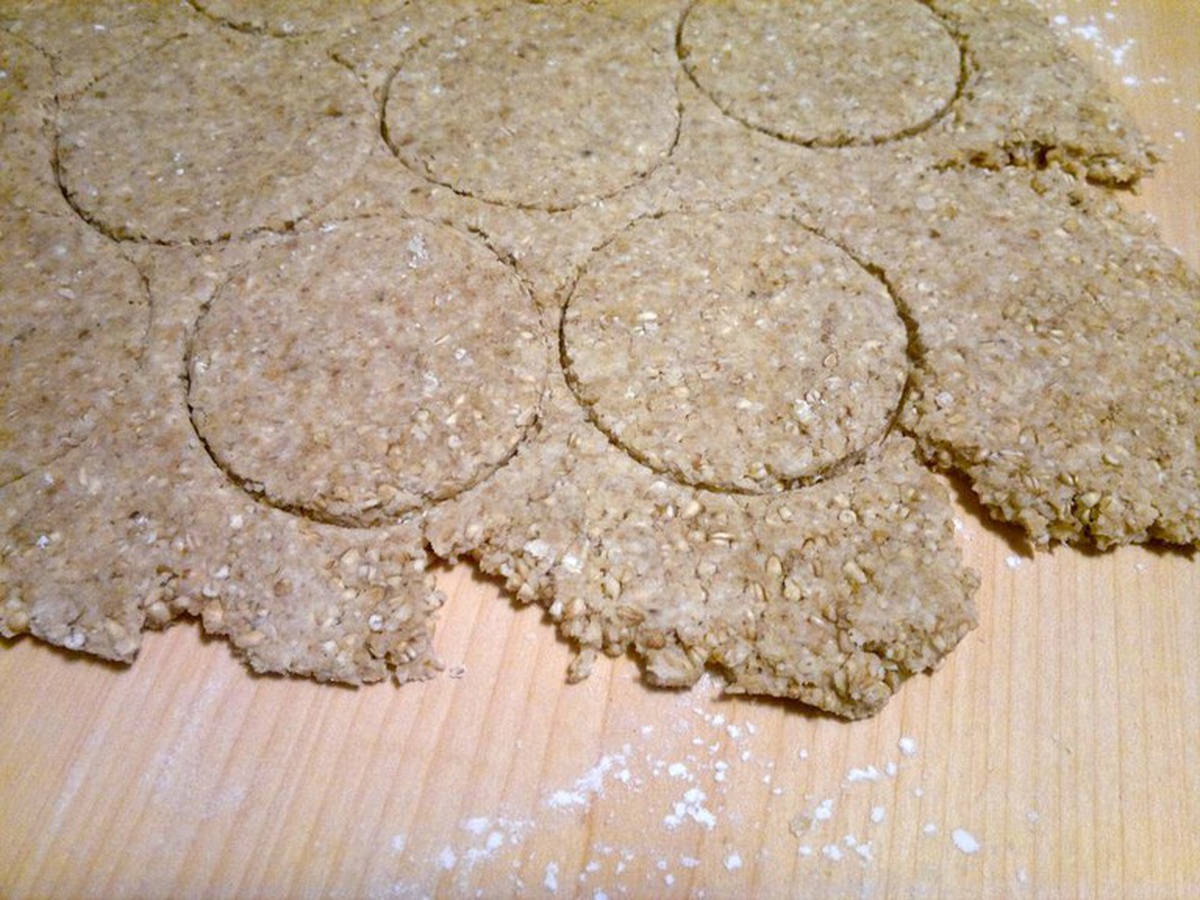 When cutting the oatcakes avoid the edges where the dough has cracked.

We usually eat oatcakes with cheese as an alternative to biscuits but they have lots of other uses too.

Notes on ingredients and the recipe method

Even in Scotland ground oatmeal, or oat flour, is not readily available but a very passable alternative can be achieved by putting porridge oats in a food processor and grinding them until a coarse meal is achieved. It is this ground oatmeal that helps bind the oatcakes together, too little and the resultant oatcake will be brittle. The pinhead oatmeal gives the oatcake a crunchy texture.

Lard or beef dripping can be successfully substituted by solid vegetable oil, thus making the oatcakes suitable for vegetarians & vegans. However, I have some concerns about the provenance and health effects of most vegetable oils, so lard or dripping it is for me. Liquid vegetable oil or butter won't give the same results. In comparison to other recipes I use a little more fat as it keeps the oatcakes from tasting dry. 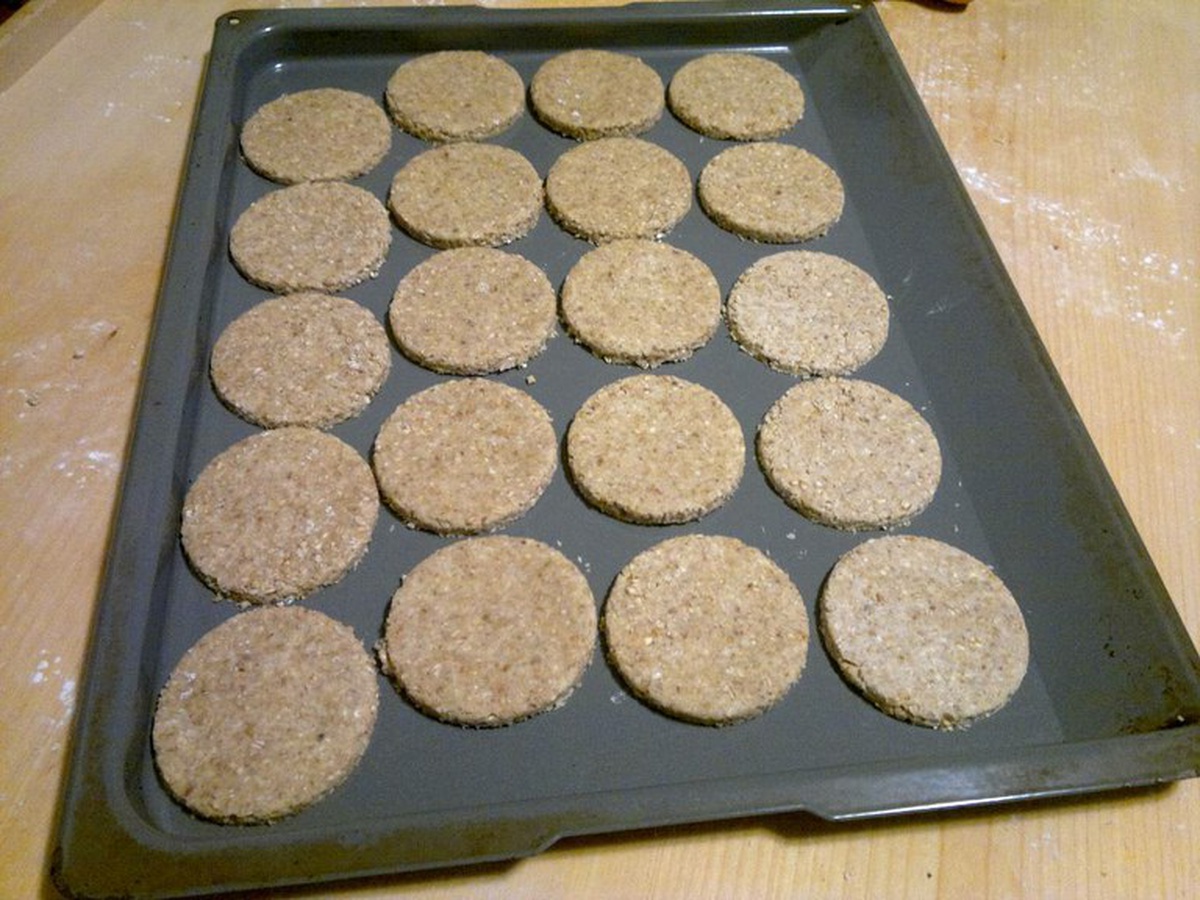 During baking the oatcakes won't expand sideways so they can be placed close together.

Scone cutters are fairly common kitchen utensils in Scottish households but if you don't have any the oatcakes can be cut using something else circular. The inclusion of pinhead oatmeal in the recipe means you need to press quite hard to cut through the un-baked oatcake, a thin drinking glass may not be a suitable substitute. You could cut them into other shapes, like rectangles, but the corners might dry out quicker when baking.

We have an Aga range cooker which has a top oven at a minimum of 200°C and a bottom oven at 70°C and this recipe was developed to make use of this equipment. The secret is to have oatcakes which are warm and moist enough to shape and cut prior to baking. However, most of this moisture needs to be removed to enable the oatcakes to be stored and to have a firm bite when eaten. Thirty minutes in the cool oven will remove the excess moisture without burning the exterior of the oatcake. If you don't have two ovens the same effect can be achieved by removing the partially baked oatcakes and cooling the main oven down to 70°C and then placing the oatcakes in the oven again.

Nomenclature and history of oatcakes

If you've not had oatcakes before the name perhaps conveys the idea of something sweet rather than a flat bread which has the appearance of a biscuit. Cake1 in this sense was also used by Rabbie Burns in his poem On the Late Captain Grose's Peregrinations Thro' Scotland:

In an even earlier period Jean Froissart wrote the following, about Scots' soldiers, in his 14th century Chronicles:

Under the flap of his saddle each man carries a broad plate of metal; behind the saddle, a little bag of oatmeal; when they have eaten too much of the sodden flesh, and their stomachs appear weak and empty, they place this plate over the fire, mix their oatmeal with water, and, when the plate is heated, they put a little of the paste upon it and make a thin cake, like a cracknel or biscuit, which they eat to warm their stomachs.

Froissart was describing the method used by soldiers to make oatcakes using very portable equipment but Scottish households would have done something very similar up until recent times. Ovens didn't become common household appliances in Scotland, or anywhere in Europe, until the 20th century. Baking goods prior to this would have been done on a girdle over an open fire. Girdles were heavy cast iron pans with a flat platter, the baking surface, and a semi-circular handle which also acted as the means to hang it over the fireplace. Baking oatcakes on a girdle is a very rewarding experience but requires a lot more skill than doing it in the oven(s) as described above.

Oats and barley were the staple grains used in Scotland when elsewhere in much of Europe wheat was eaten instead. In most parts of Scotland the climate and conditions are not conducive to growing wheat and the hardier oats and barley were more suitable crops. The witty, but un-attributed2, reposte to Samuel Johnson when he was questioning Boswell's habit of eating oats for breakfast illustrates this difference:

Samuel Johnson:
"In England we wouldn't think of eating oats. We only feed them to horses."
James Boswell:
"Well, maybe that's why in England you have better horses, and in Scotland we have better men".

I've been meaning to make my own mustard condiment for years, but never got around to it for one reason or another. If I had realised how easy it is to get a really tasty result, I would have done ... [Read more]

Every European country probably has a traditional one-pot meal and bigos is one that belongs to Poland (and possibly Belarus, Lithuania & Ukraine too). I can't lay claim to know much about bigos, in fact I didn't know of its ... [Read more]

It isn't going too far to say this recipe will change your life utterly, no, really. Once you have tried this recipe there is no going back, you will be bulk buying cauliflower just so you can have this every ... [Read more]

I decided to have something different for Sunday breakfast: Poppy Seed Bagels. However, as it takes a little longer to prove the dough it became brunch instead. I don't claim to be a bagel expert and I am sure there ... [Read more]