How Green Was My Valley is the story of the Morgan family who live in a South Wales mining village around 1880. Their lives, loves, financial hardships & religious struggles are told through the eyes of the youngest son, Huw. 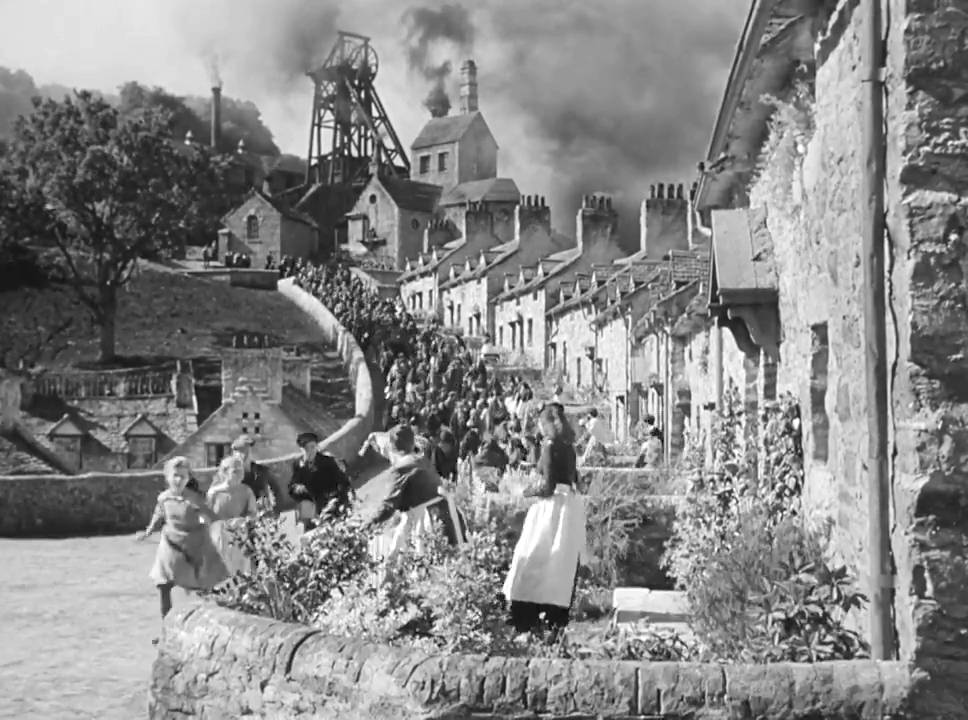 Scene of the village showing it built around the coal mine

A very entertaining and sometimes poignant story highlighting the highs & lows of a close-knit family & community. The film is superbly directed by John Ford, and the cinematography by Arthur Miller is very atmospheric. All the leads put in great performances, especially: Donald Crisp as the father, Maureen O'Hara as the daughter, Walter Pidgeon as the preacher, and most of all a very young Roddy McDowall as Huw. It is no wonder this film had so many nominations (10), and wins, at the Oscars, including pipping Citizen Kane for Best Picture. How Green Was My Valley (HGWMV) also won Best Director, Best Cinematography, and Best Supporting Actor (Donald Crisp). Is HGWMV better than Citizen Kane? I'm not saying. Go watch the film and judge for yourself. 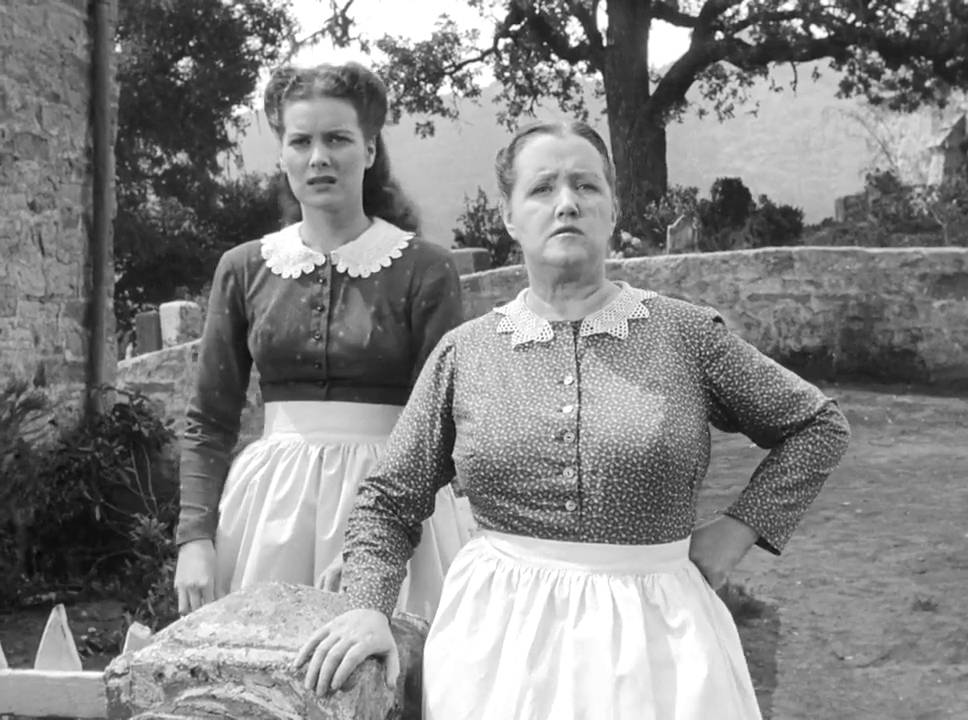 HGWMV is mainly a narrative film, but it also tackles various themes including: family, religion, socialism, environmentalism & sex. It manages to handle all of these topics deftly, and I suspect some viewers won't realise they have just received a message. The film certainly doesn't come across as preachy. 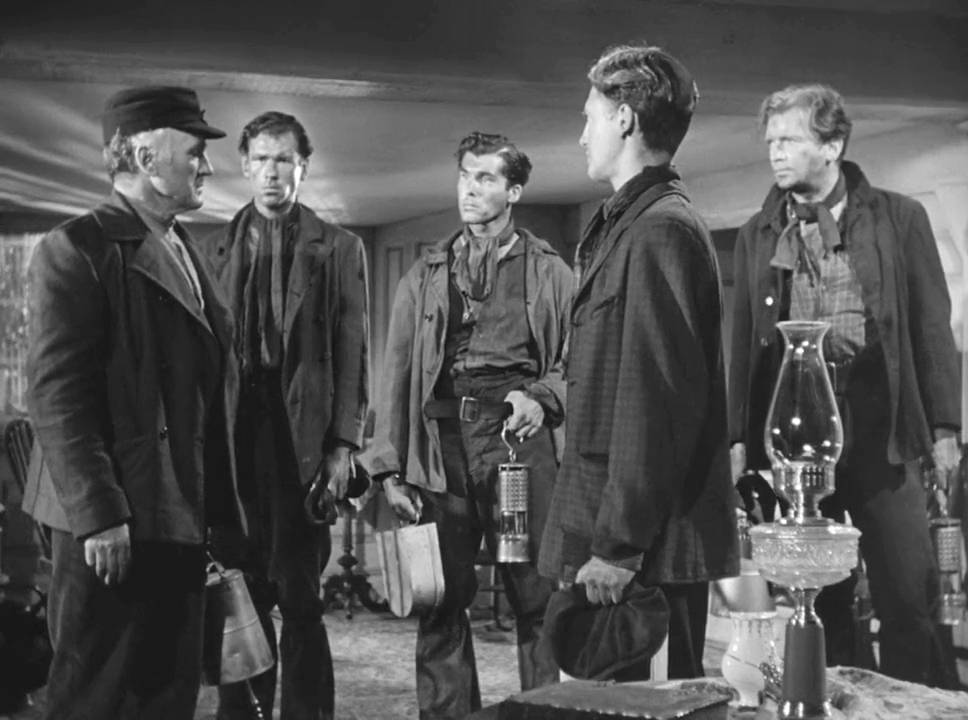 In one scene the sons confront their father about the mine owner cutting the workers' wages. The father accepts the mine owner's position, the sons support forming a union. The short scene is the clearest justification for workers taking collective action I have ever seen.

Ianto (son)
Not while there are three men for every job.

5th son (Gwilym junior)
Why should the owners pay more if the men are willing to work for less.

Father (Gwilym senior)
Because the owners are not savages. They are men, too, like us.

Ianto
Men, yes, but not like us.
Would they deal with you, just now, sir, when you went to them?

Ianto
That is because they have power and we have none.

Father
How will we get power, from the air?

Father
Union is it? (words not clear)
I never thought I'd hear my own sons talking socialist nonsense.

The film also has an environmental message, evident, of course, from the title and the opening sequence. The film starts with Gwilym, the father, taking Huw for a walk in the valley. The older Huw acts as narrator and says:

"In those days the black slag, the waste of the coal pits, had only begun to cover the side of our hill, not yet enough to mar the countryside, nor blacken the beauty of our village."

At the start of the film we see a pristine, and pretty village, later the village is blackened and run-down. Proximity to the mine was its reason for existing, but also became the reason for the village's decline. 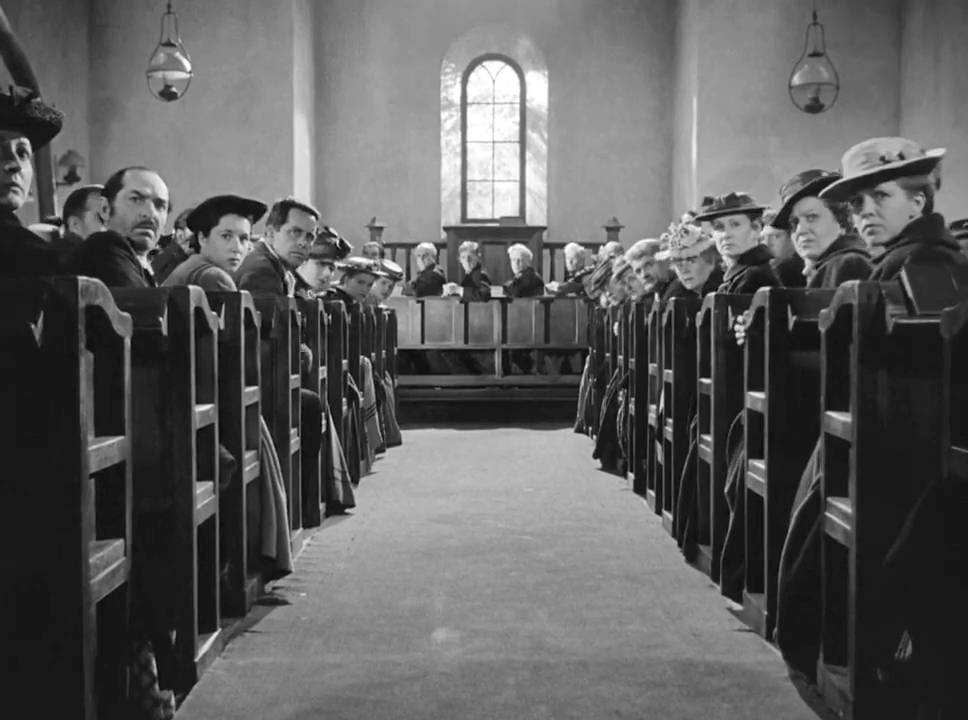 The final theme I will mention that is tackled in HGWMV is religion. There were two facets to this theme: sex & politics. Interestingly, the preacher (Walter Pidgeon) is sympathetic, but the town collectively and the deacons, in particular, are spiteful in their treatment of an unmarried mother. A small community can be idyllic, as we see in the portrayal of the first Morgan wedding, but it can also be hell when all are against you and you have nowhere to turn to for help. 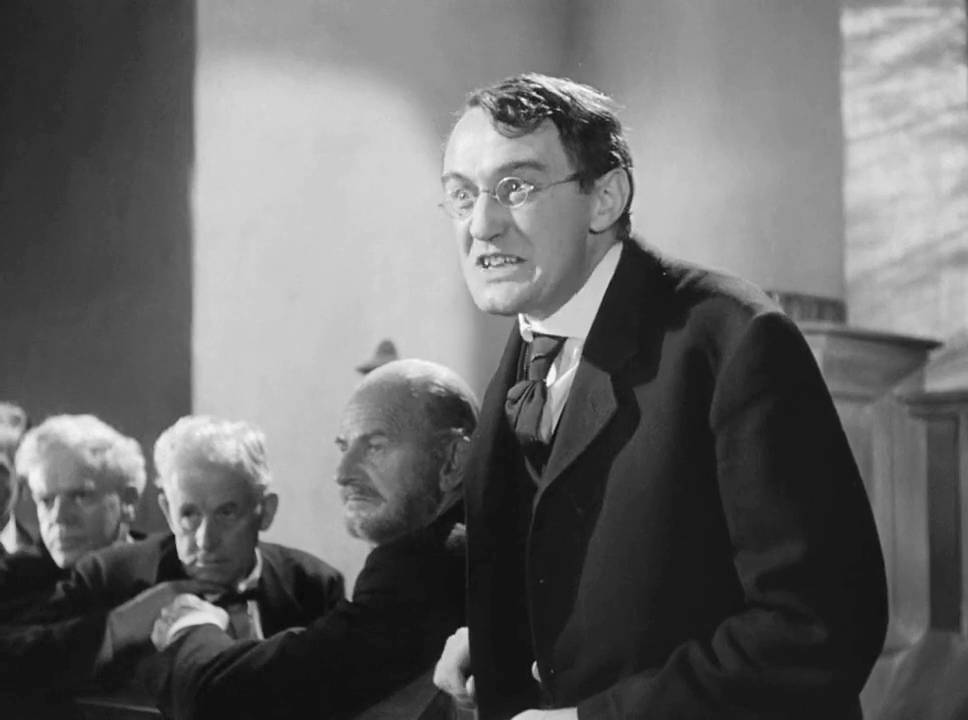 The leading chapel deacon railing against the unmarried mother

The chapel (is it a Methodist congregation?) is also criticised for effectively supporting the mine owners against the workers. The chuch is accused of being a unifying force, but, unlike a union, one that doesn't specifically take the side of the workers. In effect the chapel is accused of: if you are not for us, you are against us. This part of the film immediately reminded me of the famous Tom Nairn quote:

Scotland not being free until the last minister of the Kirk has been strangled with the last copy of the Sunday Post.

Criticising religion and supporting an unmarried mother was unusual and brave for a film made in 1941. Bravo!

HGWMV is a thoroughly entertaining film which also gets across some messages, without ramming them down your throat. Viewers will most likely want to return to HGWMV multiple times to either enjoy it again or to appreciate some of the finer details they might have missed on prior visits. I know I will.