A short while ago I was researching some statistics on past Olympic Games and came across some information about the swimmer Johnny Weissmuller. The name was immediately familiar to me but from a quite different context. During my childhood, showings of his Tarzan films were regulars on Saturday morning television and even now I can picture him in his various adventures alongside co-stars including Maureen O'Sullivan, Brenda Joyce, Johnny Sheffield ("Boy") and "Cheeta" (which confusingly was a chimpanzee). 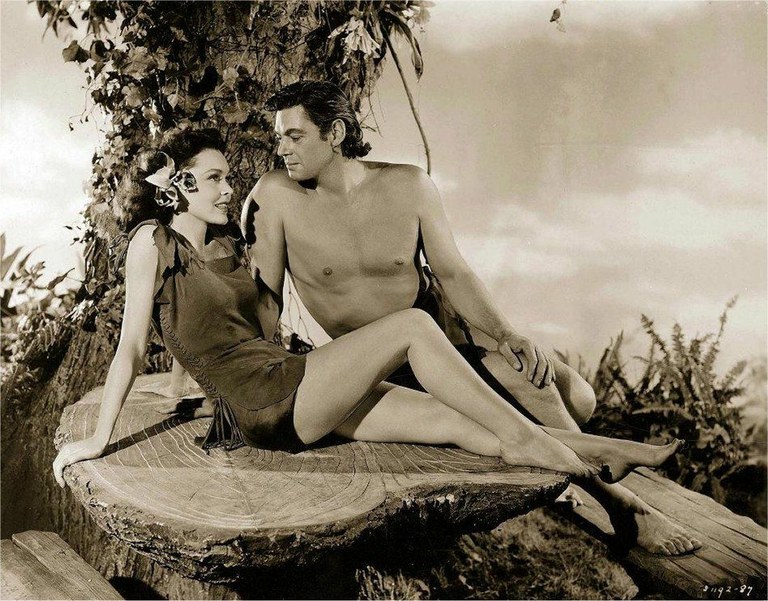 Immediately before his acting career Johnny was a very successful competitive swimmer achieving multiple world records and was an Olympic medallist just like his fellow Tarzan actor Larry "Buster" Crabbe. This is how his sporting achievements are described on Wikipedia:

In all, Weissmuller won five Olympic gold medals and one bronze medal, fifty-two United States national championships, and set sixty-seven world records. He was the first man to swim the 100-meter freestyle under one minute and the 440-yard freestyle under five minutes. He never lost a race and retired with an unbeaten amateur record. In 1950, he was selected by the Associated Press as the greatest swimmer of the first half of the 20th Century.

Fairly soon after his swimming career he landed his first major movie part playing the title role in "Tarzan the Ape Man" which was both a success with critics and a huge commercial hit. The film made Johnny into a Hollywood star and household name. In total he made 12 Tarzan films and then went on to make 14 films as the safari suit wearing Jungle Jim. However, for me, it was his MGM outings as Tarzan, with Maureen O'Sullivan as Jane (pictured above), that really stand out. There were six MGM Tarzan films starring Weissmuller and O'Sullivan:

The earliest films were probably the best but they are all worth watching as escapist entertainment and are a lot of fun. The first two films on the list were screened prior to the introduction of the Hollywood Code and are fairly sexually explicit when compared to the films from 1936 onwards. The films deserve a much longer review, which I hope to do once I obtain copies on disc.

Johnny's trademark in all the Tarzan films was his Tarzan Yell which would probably be recognised even by people not familiar with the films. In the Tarzan films the yell is used variously to: call out to Jane, a cry of victory, bring jungle animals to assist him, help Tarzan get in the rhythm when swinging on vines and announce his arrival.

Johnny Weissmuller used the yell one last time and it demonstrated that he had a wicked sense of humour. Johnny requested to have a recording of his Tarzan Yell played three times as his coffin was lowered into the grave at his own funeral. That's going out with style.