Kill Me Again is a 1989 film noir modelled on the classic films of the 1940s. A down on his luck private investigator owes money to some nasty loan sharks, which he is unable to repay. The loan sharks rough him up, and make it clear worse will happen if he doesn't repay on time. A beautiful woman enters his office and offers to pay him $10,000 if he will fake her death and give her a new identity. She claims she needs it to escape her abusive boyfriend. The private investigator doesn't believe her, but he needs that money, and besides he really likes this kind of client. Of course, things turn out to be much more complicated, for both of them. 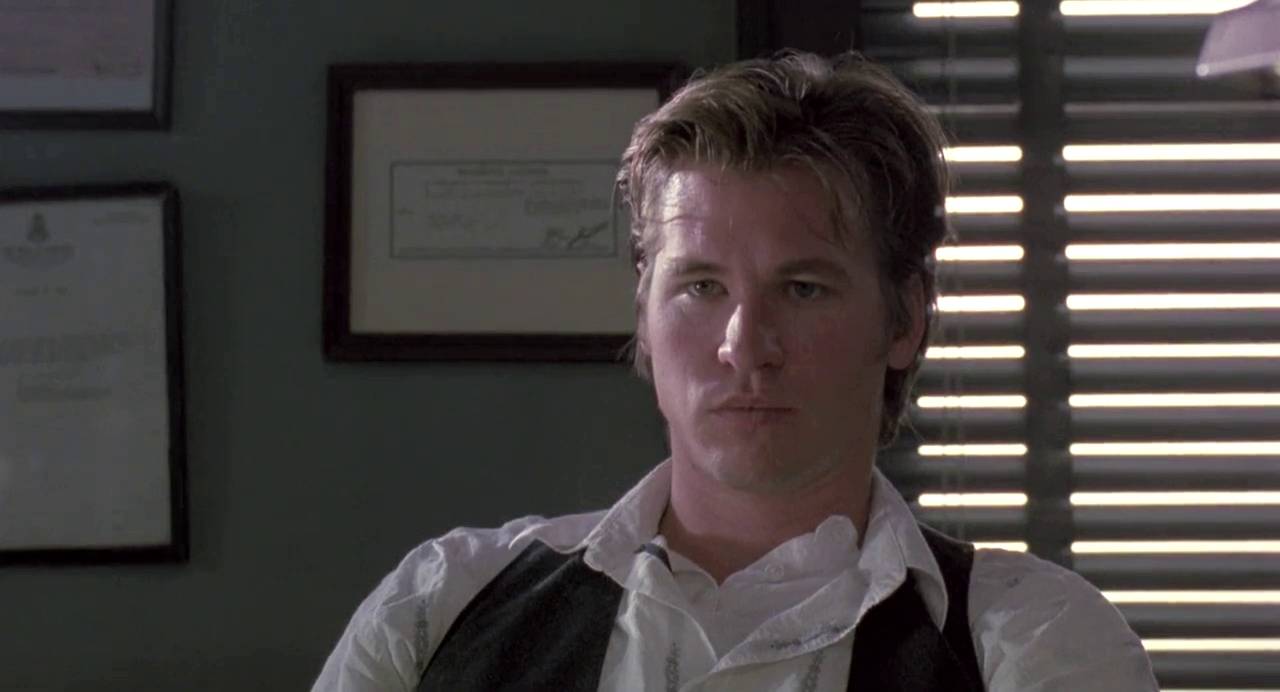 This is  pretty good film noir from first time director John Dahl, who would later direct The Last Seduction (1994). The film stars Val Kilmer as Jack Andrews the private investigator, his wife at the time Joanne Whalley[1] in the femme fatale role, and Michael Madsen as her psychotic boyfriend. The action is fast-paced and, in the best film noir traditions, there are lots of twists and turns in the plot. The ending is really surprising too, another noir tradition. Be warned: as well as a few shootings there are a couple of scenes of violence that might make the more sensitive viewer want to look away for a few seconds. 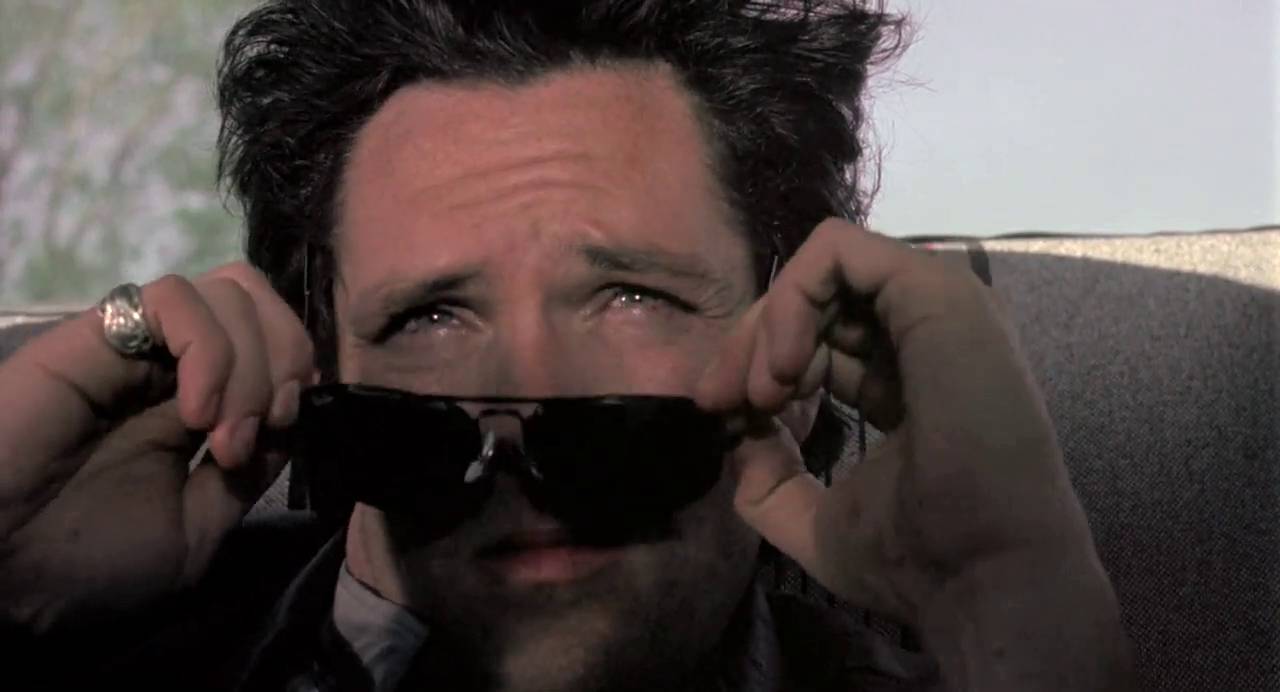 Michael Madsen as Vince Miller in Kill Me Again

The three leads put in some great performances. Joanne Whalley is utterly convincing as the double-dealing femme fatale and really looks the part, too. Michael Madsen always makes a great baddie and he does it again in this film. There is something about his manner and looks that just scream out "don't mess with me".

Kilmer has the much more difficult basically-a-good-guy-who-has-to-cut-a-few-corners role. His acting is very believable, but he doesn't perhaps look the part. When we see Humphrey Bogart playing Sam Spade he looks like he has seen some rough times, but is also capable of coming out ahead. Val Kilmer looks rather too fresh faced and innocent, almost boyish. Three days of stubble and some careful work by the make-up department could have fixed this problem. 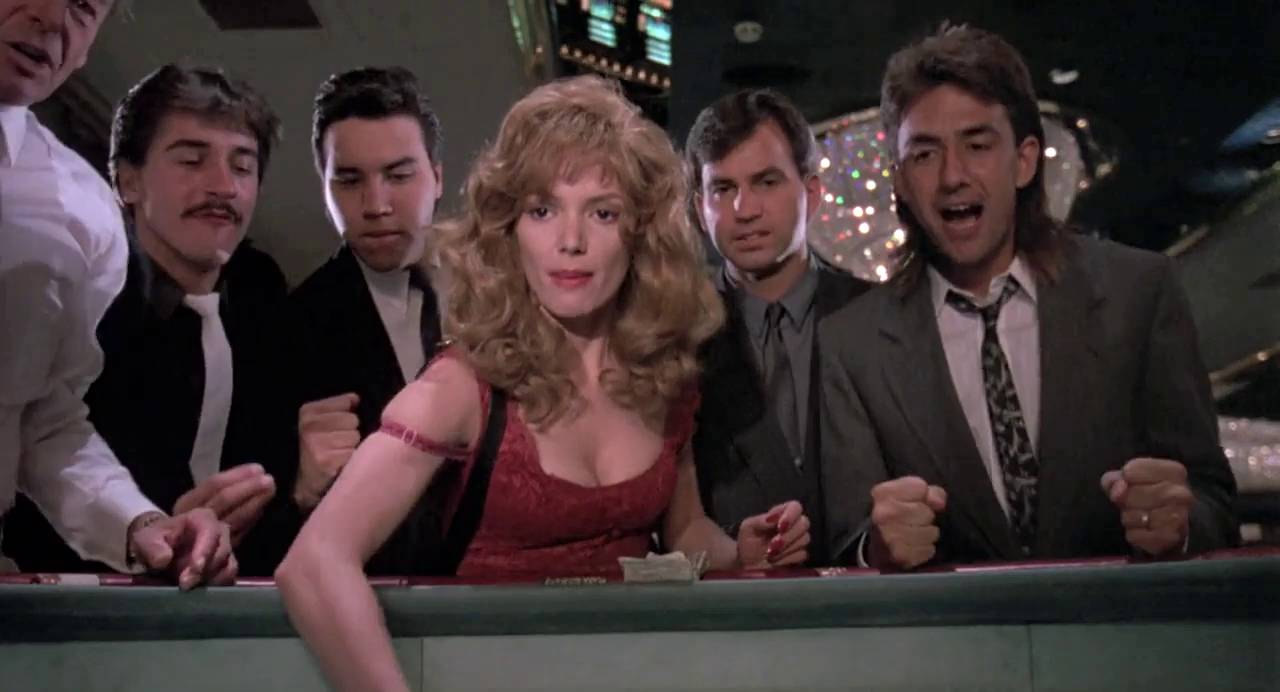 One of the big differences between this 1989 film noir and the movies from the 1940s is the former being filmed in colour[2]. However, the use of colour has been quite restrained. All the characters seem to be clothed in near monochrome except for Ms Whalley who spends a lot of time wearing the red dress as shown in the photograph above. Even when she was wearing a green dress the plot requires her to get covered in blood. The viewer isn't left in any doubt that they are watching a dangerous femme fatale. 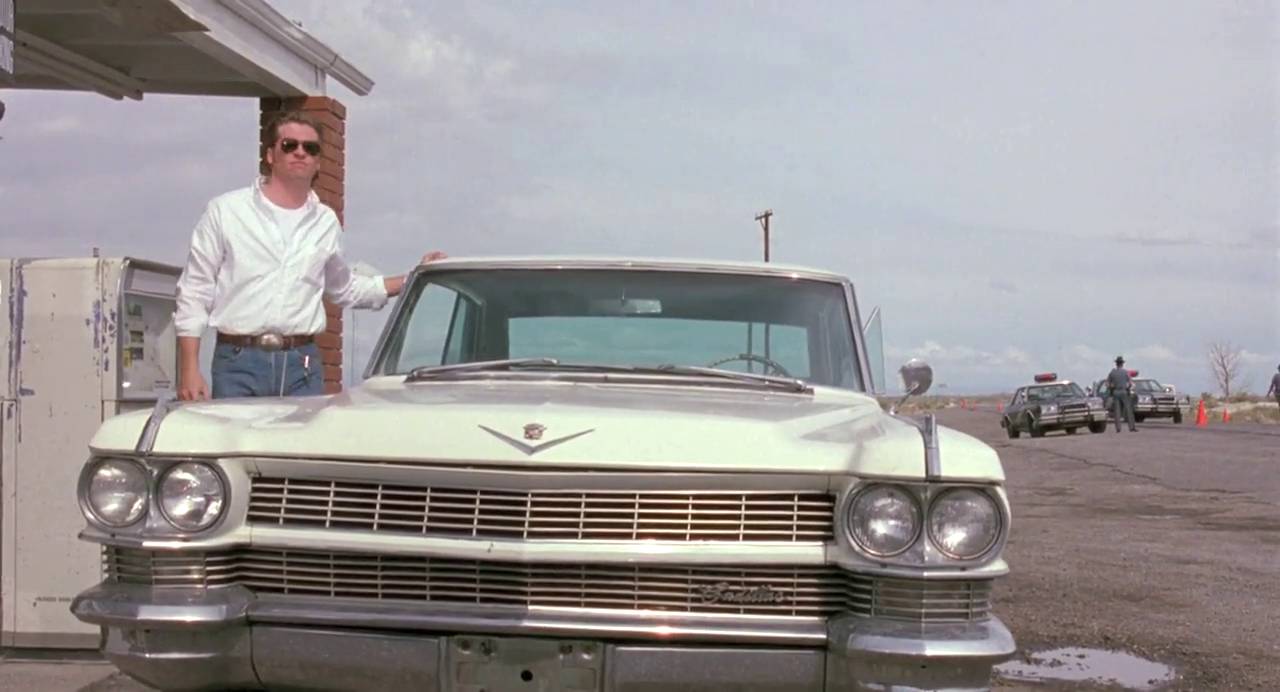 Our "hero" surveys the highway from the gas station

Much of the action takes place indoors and the cinematography has a suitably dark and moody feeling as expected for a film noir. The only beacons of light are provided by the neon signs of the various gambling houses. When the movie action does move outside, during the day, the viewer is blasted by the bright, harsh sunlight of the Nevada desert. An effective use of dark and light.

Kill Me Again had some mixed reviews when it was released and, perhaps consequently, it didn't do well at the box office. That was a shame as it is an entertaining film with some great performances, fast paced action and some intriguing twists and turns in the plot. Reviews of the movie now seem to be much more positive, as if the the passage of time has allowed more objective assessments to be made. If you get the chance watch Kill Me Again, you won't be disappointed.

Leave Her to Heaven is a 1945 film noir, directed by John M. Stahl, starring Gene Tierney and Cornell Wilde. It tells the story of published author Richard who meets Ellen, while both are on vacation in New Mexico. Within ... [Read more]