My kingdom for a transponder

We recently purchased a very low mileage secondhand Peugeot Partner Combi. The vehicle is in very good condition and had a full service history. I believe the car, when new, came with one remote control key and one manual key. The remote key had two buttons on it, one to unlock the car and the other to lock it. Through years of use the buttons on the remote key had broken but the previous owner hadn't replaced the key and instead had just taped over the missing buttons.

Replacement key sets can be purchased online for as little as £5 including postage. At that price it seemed excellent value to  get the convenience of remote locking/unlocking again. The set we bought contained: a plastic key fob, one new battery, two micro-switches, and a blank key blade. Making the swap was easy. I opened the old key and removed the key blade and the printed circuit board (PCB). I then removed the old battery from the PCB and replaced it with the new one. The two original micro switches looked to be fine so I left them in place. I pushed the original key blade into the slot in the new key fob. Finally, I pressed the two halves of the key fob together and I was all ready to go. 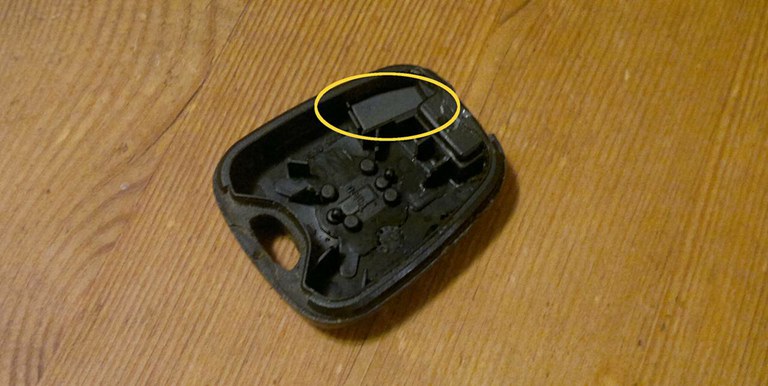 Keyfob from a Peugeot Partner Combi

I took my refurbished key outside and tested it on the car. Locking and unlocking worked just as it should, I was pleased. I then tried to start the car and was surprised when it didn't fire into life on the first turn of the ignition. I tried to start the car again, it still didn't work. I retrieved the spare key from the house, put it in the ignition and this time the car started immediately. Hmmm.

I had incorrectly assumed that the ignition transponder chip would be mounted on the PCB, it wasn't. I dug out the old key fob from the wastebin and after careful investigation I found the chip placed in one corner. The circle in the photograph above shows the transponder chip location in the original key fob.

Once I placed the transponder in the new key fob I was able to start the car without any problems.