It is the time of year when the beech nuts are developing, and, consequently, the branches are getting heavier. A few branches above the house were sagging, and as a result were touching the chimney head and the apex of the roof. These branches required to be dealt with immediately, before we get any gales. The problem is I don't have a pole pruning saw. Buying one would likely require some serious research. Cheap pole pruning saws can be bought for around £100 and they go up to (sic) £400 plus. The ones with mini chainsaws at the end cost a lot more. 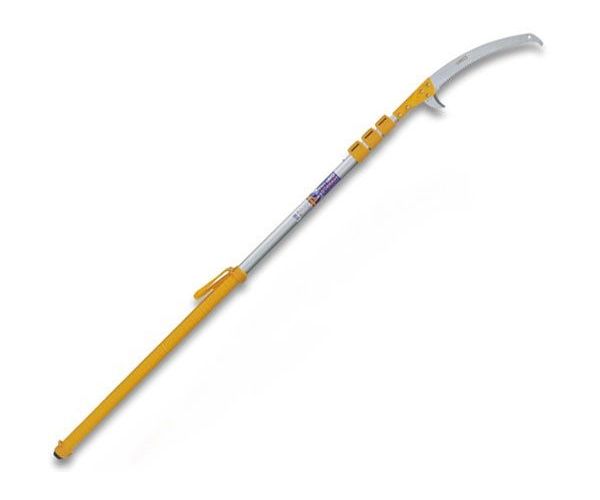 A typical pole pruning saw, this one is from Silky Hayate.

However, I didn't want to delay the job while researching pole pruning saws. Buoyed by my recent success with fabricating the Trident Tool, I decided to make my own. I used a 3 metre bamboo pole and a Bahco brand handsaw. For the Mark 1 version I used wire to attach the saw to the pole. That didn't work, I couldn't get the wire tight enough to firmly hold the saw.

My home made Pole Pruning Saw.

For my second attempt I used 1 centimetre wide cable ties, and that worked perfectly. It was chance that I used a bamboo pole, as I happened to have one in the shed, but it turned out to be an inspired choice. The natural rings in the bamboo prevents the cable ties from slipping down the pole once they have been tightened. As I already had the saw and the bamboo pole the total cost was £0.30 for the two cable ties. In fact, the cable ties are the type which can be re-used, so I can disregard the 30p cost. A 3 metre pole pruning saw for free, and it was really effective. I might not bother buying a proper pole pruning saw at all.