We have a peanut (groundnut) feeder made of wood and shaped like a house. On the top of the feeder are two slates which form the roof. However, there is a gap between the slates which allows water to drip down into the nuts. In a wet West Highland climate it doesn't take long for the peanuts to rot when constantly supplied by dripping water. To prevent water ingress we fashioned a metal strip to act as ridging. This worked really well until last winter when we would constantly find it lying on the ground. The winter storms must have been worse than we thought. 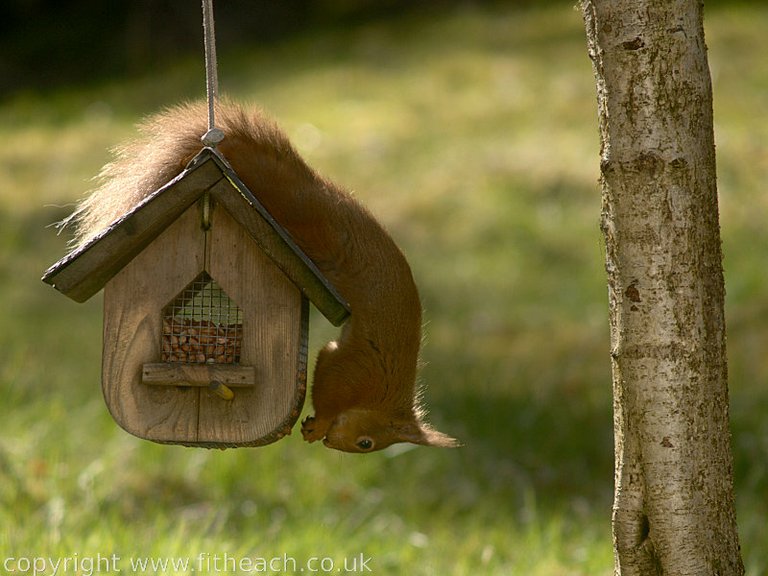 Then one morning we saw "Roderick"[1] the red squirrel (Sciurus vulgaris) eating at the feeder and as he jumped off he pulled the ridging with him. After this initial sighting we would see Roderick on a regular basis. He had a very skillful technique for extracting the peanuts. He would climb up the post that held the feeders, slide down the rope holding the peanut house and land on the roof. He would then hold on to the ridging with his rear claws and hang downwards, resting on the slate, gripping the nuts with his teeth. Somehow he managed to wangle out the nuts at a rate of one peanut every few seconds. Later, we tried for several minutes with our fingers to get just one peanut out through the mesh and failed. As Roderick ate the nuts we could see the red skins being discarded. It seemed to be a conscious effort to remove the skins not just chance. Occasionally he would pull himself up into a sitting position on top of the feeder and nibble at a peanut between his paws. 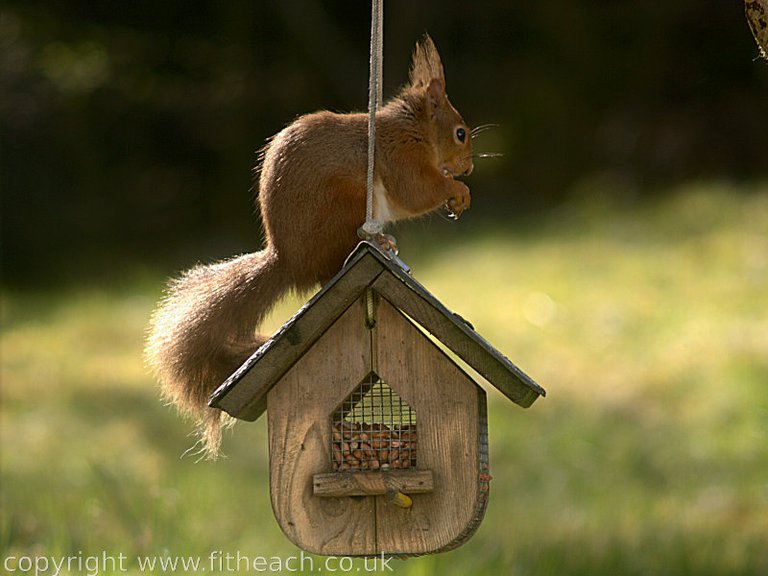 Recently we haven't seen Roderick but that might be because he has been visiting when we haven't been in the kitchen or his natural food sources have increased so he doesn't need a peanut fix. Then yesterday we saw a new squirrel approaching the feeder for what looked like the first time. This squirrel, which we later named Gnasher, knew there was food in the feeder but wasn't quite sure how to tackle it. He tried hanging down the left side, attacking from the front, hanging down the right side and even swinging about directly underneath. It didn't appear he was getting many peanuts out. Probably due to his lack of success he changed his approach and started to gnaw at the wooden sides of the feeder. In a matter of seconds Gnasher had chewed off a substantial amount of the soft wood and had he continued would have accessed the nuts inside. After this demonstration of how sharp squirrel teeth are we knew what to call him. He has been back several times but each time he has tackled a different corner so hasn't broken through yet. Gnasher has begun to learn a technique for getting the peanuts out but still doesn't seem as accomplished as Roderick. 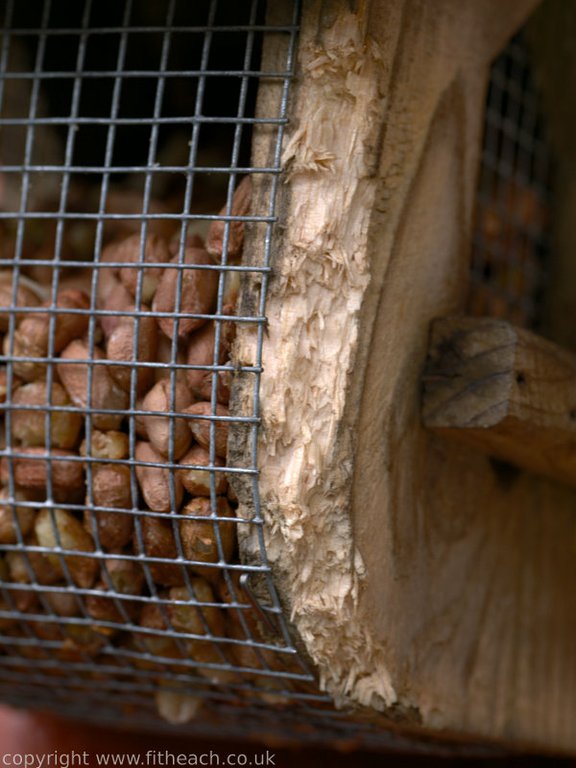 We are able to easily tell Gnasher and Roderick apart because the former is a little smaller and has a damaged tail. Assuming the peanut feeder can survive this punishment it will be interesting to see if Gnasher improves his technique over time.

[1] We have no idea if either Roderick or Gnasher are male or female but the names have stuck now. Roderick was the squirrel mascot for desktop publishing package RagTime and Gnasher got his name because of his teeth, not after the well known dog.