Recently, we had a courtesy car while the insurance company were deciding what to do about our car accident claim. The car provided was a Volkwagen Up! I was initially dismissive of the car due to its diminutive proportions, to the extent of thinking about it as a motorised roller-skate. We also had never ending puns based on the model name prefixed by any verb imaginable. Oh, and VW really do use the exclamation mark as part of the name. 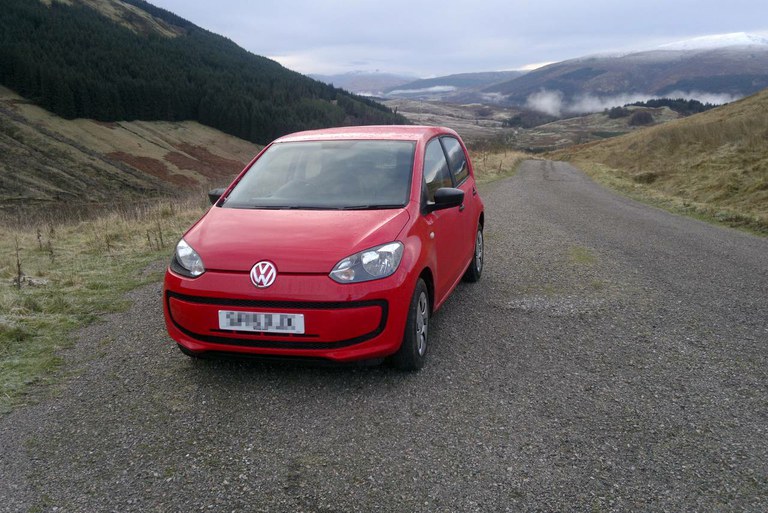 However, by the end of the three weeks we had it I had really grown to love the wee city car and was sad to see it returned to the hire company. For a 1 litre engine it was really nippy, parking and manoeuvring were a cinch, fuel economy was easily 60mpg+ and there was a TARDIS like quality where the space inside belied the small dimensions from the outside. 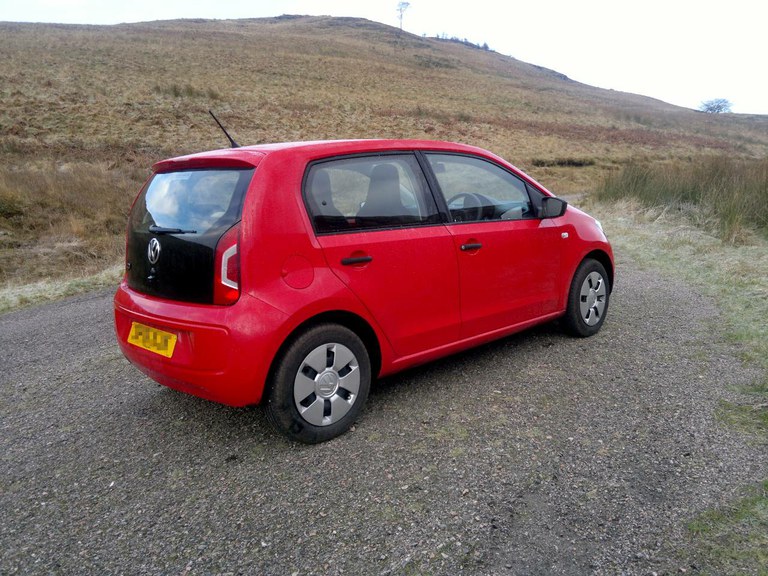 VW Up! side view

The car seemed to be really well made as everything had a satisfying solid feel. It is always reassuring when you shut the car door and it makes a "thunk" noise rather than a tinny "clang". The only exception to the solid feel was the floorpan which was either too thin or lacking insulation. On one of our local roads, shown in the pictures above, there were a lot of small, loose stones which the tyres would throw up onto the underside of the car. The resulting noise was like someone shovelling gravel into an empty biscuit tin.

I could write a very long article about all the things I really liked about the car but instead I'll mention one major fault and several wee niggles. The first wee niggle I encountered was when I first drove the car to the supermarket. I got out, locked the driver's door and then checked the other doors but they were all still unlocked. Arrgh, our Up! didn't have central locking, the rear doors didn't have external locks and there wasn't the usual button type lock in the inside. This car didn't have an owners manual so I spent 10 minutes trying various things to lock the door. Eventually, I discovered that the interior levers which you use to open the rear doors also operated as locks by pushing them inwards. Locking the driver's door did lock the boot so I wonder how much it saved by not extending central locking to the three passenger doors. 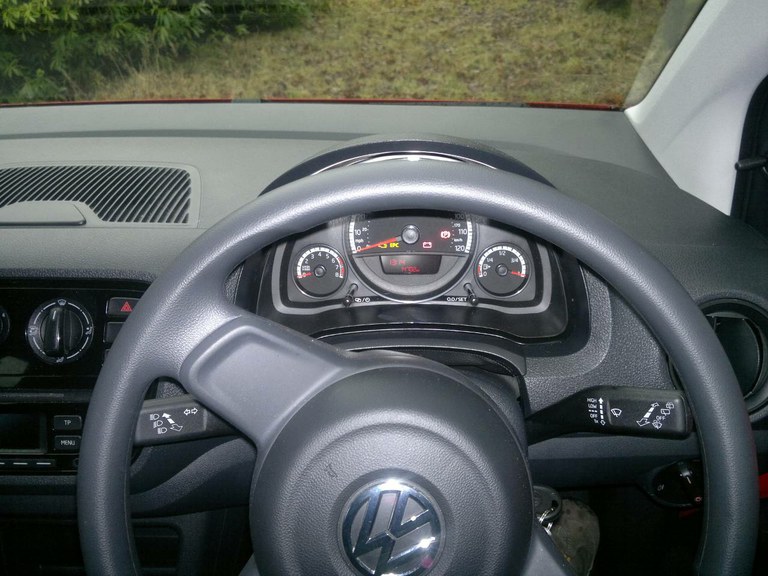 VW Up! view of dashboard taken from driving position

On my first trip in the car I also noticed up and down arrows that would appear next to the gear indicator in the dash. I wasn't sure what they meant initially and then it hit me, the car was telling me when I should change gear. Suddenly, the car had turned into the world's worst back-seat driver and I couldn't stop it. Those little arrows would always catch my eye and I then felt I had to justify my driving.

The last wee niggle was the fuel gauge which would display full for absolutely ages and then suddenly drop like a stone towards empty. This is probably not such a big deal in this car's intended enviroment but in the Highlands, with big distances between filling stations, it could be a major nuisance.

The one major fault was the relative positions of the car steering wheel and the speedometer. I took the photograph of the car dash, shown above, from my preferred driving position. In this position the steering wheel neatly hides the speedometer all the way from 20mph up to 100mph. For a speedometer to be of any practical use you should be able to quickly glance at it. This is particularly the case for the crucial speed limits of 30, 50, 60 and 70mph all of which were obscured in the Up! I resorted to either dipping my head to see the indicated speed or trying to guess my rate of progress from the angle of the needle. Neither of those options were satisfactory.

C'mon VW, re-position the speedometer and get rid of the gear indicator, it would be a win-win decision.