Our house has many old style British round-pin sockets installed in the skirting boards. We don't use these sockets but bit-by-bit we are making use of the locations to fit more modern square-pin sockets. I recently removed a 5 amp socket, pictured below, in the downstairs hallway and was amazed with the sturdy build of the back box. 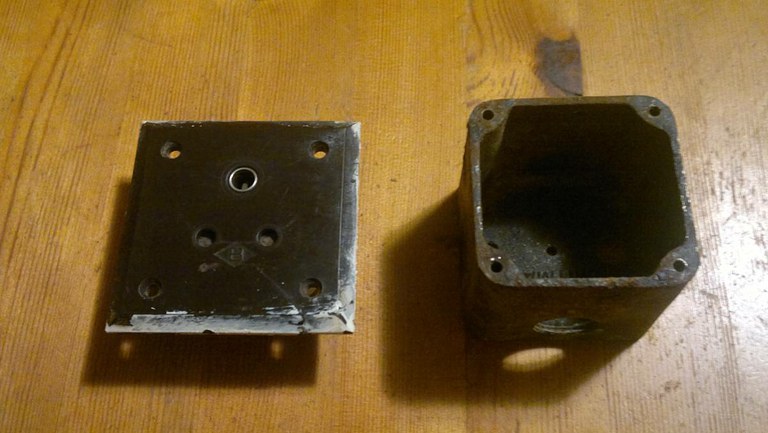 Old style British round pin 5 amp socket and back box

The whole back box is made of solid metal (steel probably) with dimensions of only 60mm x 60mm x 50mm but weighs a whopping 380 grams. This is single gang socket in the mid-sized 5 amp rating, there are double gang 15 amp sockets elsewhere in the house which will probably require a fork lift to take out. The socket was probably installed at least sixty years ago and would have still been serviceable except all our appliances now have square pins.

The socket and back box are both branded "Britmac". I didn't find a Britmac company, after a brief Internet search, but did come across Britmac electrical products being sold by Electrium which in turn is owned by Siemens Holdings PLC. Other sockets, and light switches, in the house are branded MK which is still a popular manufacturer of household electrical products. MK is a subsidiary of Honeywell. At some future point I will discover if the MK products are as sturdily made as the ones from Britmac.

Not built to last

This is going to sound like one of these moans that things ain't made they way they use to be. It will sound like that because that is exactly what it is. The last time I bought a pair of ... [Read more]