So, there must be an election coming up soon. 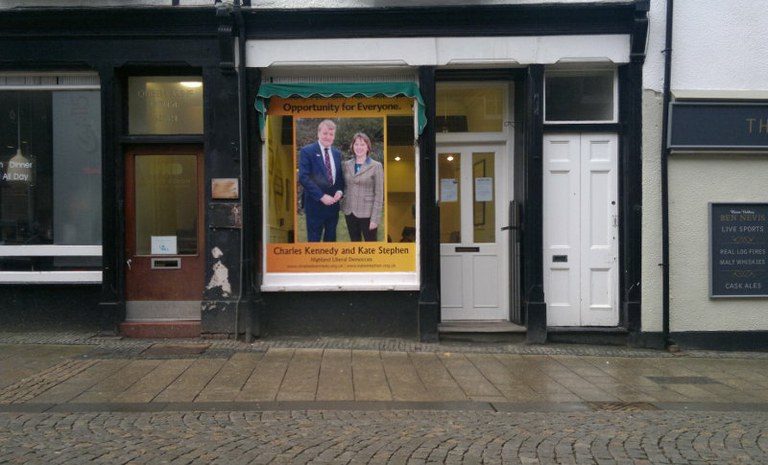 I was wandering down Fort William High Street for the first time in ages when I came across the rather disturbing larger than life size poster of Charles & Kate. The Liberal Democrat politicians, namely Charles Kennedy MP and Cllr. Kate Stephen, were dominating the window of a LibDem "shop". The poster was disturbing not because of the people pictured just that you are not expecting a couple of oversized people peering at you from a shop window. 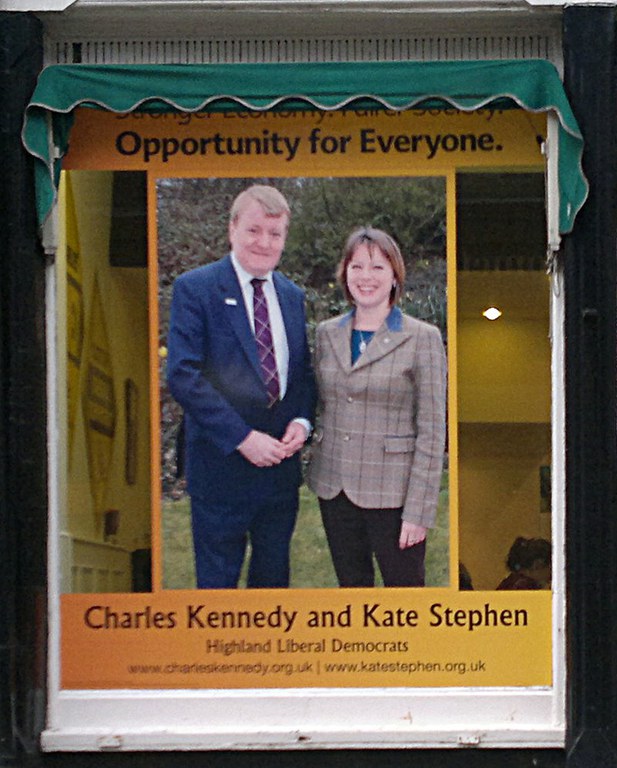 The poster raises a couple of interesting questions even apart from: why is Charles looking so awkward in the photo?

Firstly, if they are "Highland Liberal Democrats" does that make them different from the Liberal Democrats that are propping up the coalition government with the Tories? A government which is determined to cut taxes for the richest while making the poorest and most disadvantaged pay the Bedroom Tax. Not what I would call "opportunity for everyone". Ever since Nick Clegg took over as leader of the LibDems, and particularly since becoming coalition partners, the party has had a relentless shift to the right. Labour aren't that far behind the LibDems and the Tories have only kept their distance by becoming even more extreme. The relative positions of the political parties are depicted graphically by the website Political Compass (a website apparently started by Glenys Kinnock).

Some might argue that Charles Kennedy is different from all these nasty Orange Book LibDems such as Nick Clegg. However, that argument isn't supported by the facts. If we look at Mr. Kennedy's voting record (as reported by publicwhip.org.uk) on the few ocassions he bothered to vote (365 votes out of 1202 or 30.4%) he only voted against the coalition 11 times. That is not the record of a rebel fighting against an increasingly right wing coalition government.

Secondly, why only two Highland Liberal Democrats? What about Danny Alexander and Lord Thurso, who also represent constituencies within the Highland Council area? Of course, it might just be because Kate Stephen has already announced her candidacy for the Holyrood seat of Skye, Lochaber and Badenoch, which is currently held by Dave Thompson for the SNP. No doubt the LibDems like to promote their candidates well in advance of the actual election (5th of May 2016).

Enough about the poster, what was the shop like? Unfortunately, I was pushed for time and didn't make it inside. All I can say is the shop was empty apart from one young woman staring intently into a large computer screen on a desk near the door. Perhaps she was viewing the polls on the Ashcroft website (or indeed the latest from Ipsos MORI) and wondering if what she was doing was worth it at all.