It seemed like a good idea at the time. We were due to have a guest visiting for ten days, so I decided to clean the chimney flue in the lounge. This flue is used by the wood burning stove and hadn't been cleaned for a few months. I thought my timing was good, as our guest wasn't due to arrive for nearly two weeks. Cleaning the flue and the stove, plus tidying up afterwards, usually takes a few hours. Simples. Boy, did that turn out to be a decision I regretted at my leisure for the next week.

I have a set of rods which are used both for cleaning the chimney and for unblocking drains. These "plumbing" rods are approximately 1 metre long and have brass fitments which enable them to screw together. The same screw fitment allows you to attach tools at the end of the rods. For cleaning the flue I have a 40cm diameter brush. The technique is simple: attach the brush to the end of one rod, start pushing it up the flue, screw on another rod and push it up the flue some more. This process is repeated until the brush reaches the top of the flue. I then pull the brush back down. The process may need to be repeated a couple of times to dislodge the soot and tar that has collected in the flue. That's the theory, and it has worked flawlessly for years. In fact, it has never failed before. Until now. 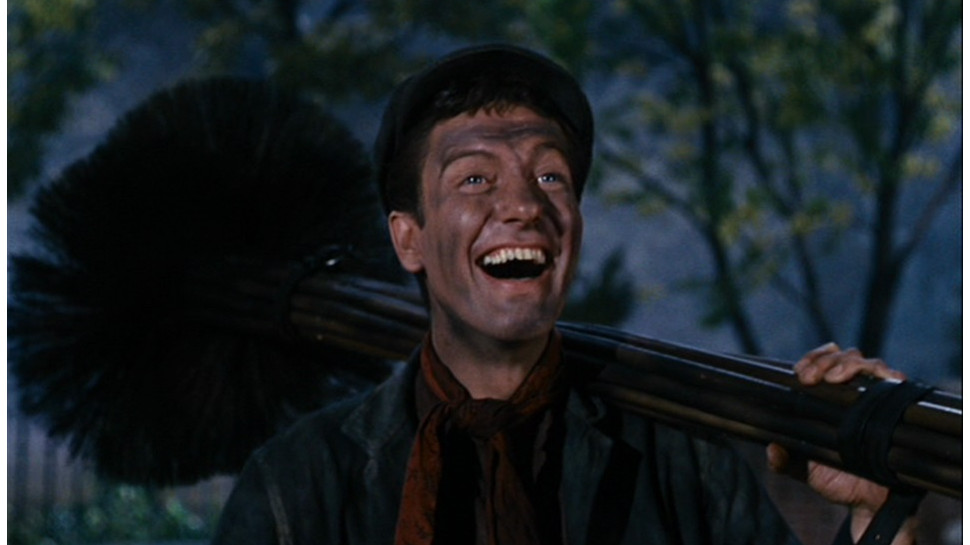 I first tried to use my smaller brush (the one for cleaning narrower stainless steel flues) to see if that would dislodge the lost brush. That didn't work. Next I tried making a sort of "grappling iron" out of metal coat hangers. That didn't work either. Time was running out, I decided to tackle it the next day. Feeling re-energised the next day I was full of enthusiasm for solving my problem. I had thought overnight that the main problem was not knowing where the brush was stuck. I had the bright (sic) idea of attaching a webcam, with two torches, to the rods and pushing it up the flue. Despite my best efforts I couldn't see anything, except lots of black stuff.

My next idea was to take a long section of rope with a pair of old jeans tied in the middle. I attached a weight to one end of the rope and lowered it down the flue. The rope was long enough that I had some spare at the top and bottom of the flue. I proceeded to pull the rope, and thus the jeans, up and down the flue in the hope it would dislodge the brush. Yet again it didn't work. All this activity took time, and another day was gone. I was doing other things during these days, but climbing up and down the roof ladder was time consuming.

The next day I tried my jeans several times, again without any success. I thought my technique was good, it just wasn't catching the brush. I tied a knot in the middle of the jeans to increase the width. I pulled them up and down the flue. Nothing. I tried again. This time they wouldn't come down all the way. No problem, I thought, I'll pull them back up the flue. They stuck about two metres from the top of the flue. Nooooo! I now had a brush, a rope and a pair of jeans stuck up the chimney. This would even wipe the smile off Dick Van Dyke's face.

from To a Mouse
by Robert Burns

It didn't matter what I did I couldn't move the jeans more than about three metres up and down. Presumably, the jeans had bunched up and the flue was slightly narrower in certain sections. Another day passed. The next day I shone a torch down the flue, fired the camera flash and managed to get a decent photo (below, left). The photo showed what I'd suspected: the jeans were bunched up and were sticking in a narrow section of the flue. I tried moving the jeans with all sorts of things including: ramming them with the rods from below, poking them with a brush handle from above and fishing for them with another section of rope with a hook, but I couldn't move the jeans any further. Another day was gone.

I was beginning to contemplate breaking into the flue from the loft, getting the jeans out and then re-building the flue. Not ideal, but needs must. However, I was determined to try a few more attempts at twisting the jeans round and pulling them up the flue. My first nine attempts failed. It wasn't looking good. My tenth attempt, and I managed to move the rope up a few extra centimetres. I rested. I tried again and this time the jeans came up all the way. Yessss! 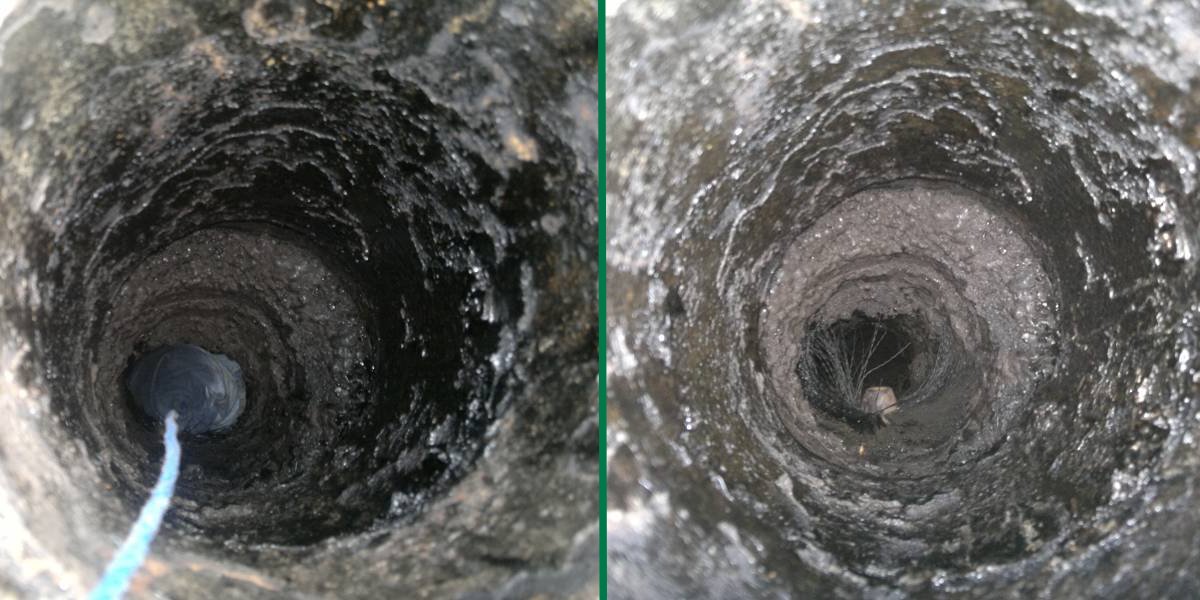 Twin photo showing the jeans stuck in the flue (left) and the brush (right).

This was progress of a kind, I now only had to deal with the lost brush. I did toy with the idea of lighting a fire and burning out the brush. This might have worked, as the brush core was made of wood and the bristles were plastic. However, I was concerned about potentially starting a chimney fire. So, I decided to take another photograph to see if anything was visible. In this photograph I was amazed to see the brush in plain sight (photo above, right). It looked like the jeans had pulled the brush up the flue. I then went back to my previous photograph, and when I looked carefully I could see the brush squashed between the jeans and the flue. Huh!

This was an excellent revelation as it meant the brush was only two metres, or so, below the top of the chimney. This time I was extra careful, I didn't want that brush to escape. I attached my small brush to the rods and pushed it up the flue, to just below where the detached brush was positioned. This would act as a safety net. I then fabricated my "trident tool" with added safety rope. The trident part was three sections of fencing wire bent at one end into hook shapes and attached to the brush handle using jubilee clips. The other end of the brush handle had a large cup hook screwed into it with a long section of rope attached. The other end of the rope was tied to my roof ladder. It would have been a disaster if I dropped the trident tool down the flue, so the rope would prevent that happening.

The broken brush and my improvised "trident tool" with safety rope.

The brush rescue operation was made much more difficult because I couldn't see into the flue when standing at the top of the roof ladder. The chimney head plus chimney pot stands more than two metres above the apex of the roof where the roof ladder was located. So, I had to operate the trident tool with my arms at nearly full stretch, while guessing the postion of the tool relative to the lost brush. My first attempt was unsuccessful. On my second attempt I carefully raised the trident not knowing whether I had caught my "fish". Then as the trident tool was nearly out I saw some black bristles come into view. I had it, I really had it. To be safe I continued to raise the trident so more of the bristles were exposed and I then grabbed them with my other hand. I was almost overcome with relief and jubilation at the same time. I may have wasted many hours, and exerted considerable effort, but not having to break into the flue still felt like a success.

Looking on the bright side, with all these things being pushed up and pulled down the flue, it is probably the cleanest it has ever been. This chimney sweep is smiling again.