I vividly remember the scenes of Japanese Macaques enjoying an outdoor hot bath shown in David Attenborough's ground breaking 1979 BBC television series Life on Earth. The macaques' natural habitat is the northern, and moutainous, cold areas of Japan which is why it gets it's alternative name of Snow Monkey. Bathing in the natural hot springs would be a welcome relief from the below zero (centigrade) winter temperatures.

The programme also filmed some macaques washing their food before eating it. Animal researchers had left some sweet potatoes on the beach so they could observe the macaques' eating behaviour. For some reason (to get the sand off the potatoes or to get a salty taste perhaps) the macaques started washing them in the sea before eating them. From appearances the macaques are not our closest relatives but they certainly seem to exhibit some pretty intelligent behaviour. 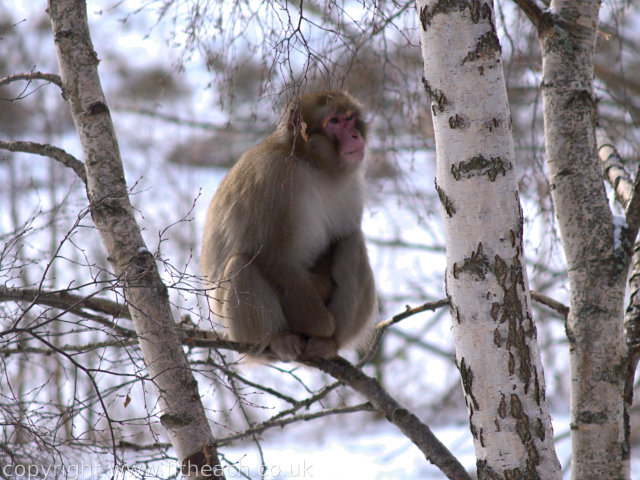 Japanese Macaque (Macaca fuscata) or Snow Monkey sitting in a tree at the Highland Wildlife Park.

I never really expected to see macaques, and certainly not here in Scotland. However, on a recent visit to the Highland Wildlife Park I saw a troop of them in a very large enclosure near to the main building. The snow on the ground and the very cold conditions certainly meant the macaques lived up to their alternative name. Their thick fur seemed to insulate them well as they didn't appear bothered by the low temperatures.

Some of the macaques were down by the small lochan, groups of 2-3 were sitting in and below the many trees, a big group were near to the building where some food had been scattered and the one photographed was sitting by itself well away from the others. This lonesome macaque was at the far corner away from the others with his back to them. He[1] appeared to be staring into the middle distance as there wasn't much to see when you followed his gaze. Was he looking for some peace and quiet? Had he been ostracised by the others in the troop? Had there been a fight recently? I don't know why he was behaving like this but it did seem to be deliberate as there was plenty of noise and activity and he didn't turn round once to see what was happening. Occasionally, he would stretch, yawn or have a scratch but never once would he turn around. It all seemed quite human like. If he were human you might conclude he was in a huff. 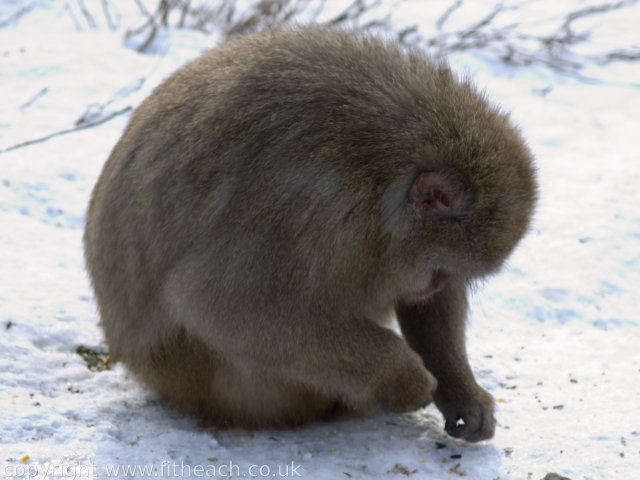 Japanese Macaque (Macaca fuscata) or Snow Monkey using its dexterous fingers to pick up seeds from the snow covered ground. Photographed at the Highland Wildlife Park.

Near to the main building where their food had been scattered on the ground there was a large group of macaques, sitting on their hanches, busily eating the seeds. Apart from the dense fur their hands do look very human like with a shorter opposable thumb and longer fingers. Some were eating two handed with great co-ordination and dexterity. Pick up a seed with one hand place it in your mouth meanwhile the other hand would be moving downwards to collect yet another seed. So, ambidextrous too! Sometimes they would pick up a seed, turn it around in their fingers while looking at it before putting it in their mouths. I didn't see any seeds being discarded after inspection but it wouldn't have surprised me as I am sure they have likes and dislikes too.

The macaques were not the only ones to have a thumb (human visitors excluded). For us, and the macaques, having an opposable thumb means we can easily grip onto things like a tree branch, fruit for eating or picking up seeds from the ground. 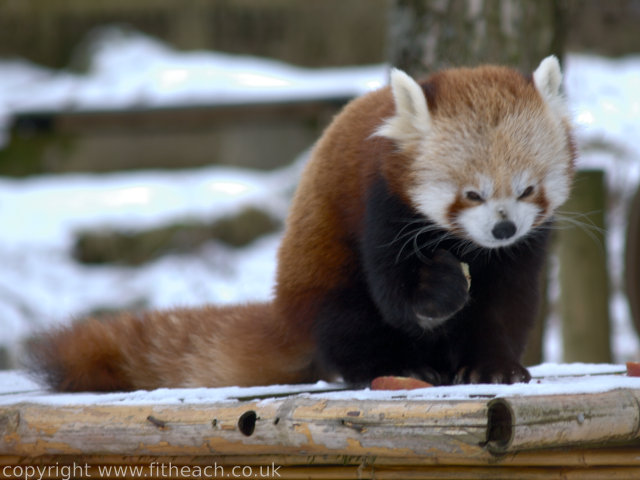 Red Panda (Ailurus fulgens) using his thumb to hold an apple while eating it. Photographed at the Highland Wildlife Park.

If your diet consists of a lot of bamboo an opposable thumb would be very useful for eating too. One of the other residents at the wildlife park, the Red Panda (Ailurus fulgens), has a "thumb" of sorts. Although the fur was too thick to actually see the thumb the photograph, on the right, shows how easy it is for the panda[2] to pick up a piece of apple and munch away at it. It isn't a real thumb because the panda has all five of its claws facing forwards but it does have an extension to its sesamoid bone, which serves the same purpose. This extended bone (part of the wrist) is something it shares with that other bamboo eater, and distant relative, the Giant Panda. Some of the primates, macaques included, make extensive use of their opposable thumbs for tree climbing but my short observations suggested the pandas do not. The pandas seemed quite adept at running along quite small branches using one of their other adaptations - inward pointing paws, which presumably allows their claws to grip better.