Limbing produces a lot of relatively small branches, which although useful firewood, is time consuming and difficult to handle.  The problem is that the branches need to be held in place while I cut them with the chainsaw. As the branches are thin, I might cut through them in a second or two. I then need to put aside the chainsaw, re-position the branch, secure the branch in place, pick-up the saw, cut the next section of branch, re-position the branch... Well, you get the idea. This process is hugely inefficient.

Disclaimer: this post describes what I do to process wood, but in no way is advice which you should follow. If you hack your leg off doing something similar, don't come running to me. 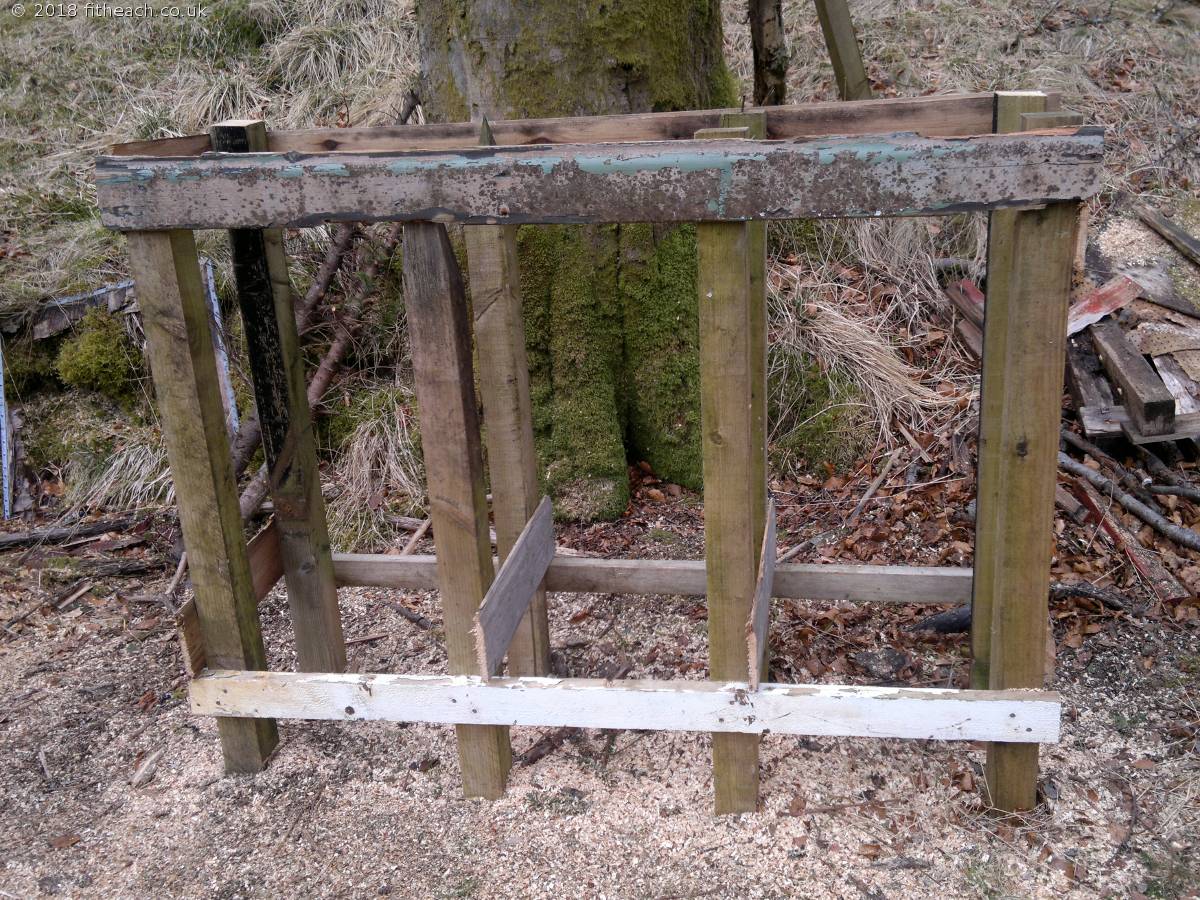 The finished construction, ready to be used for cutting branches

I have devised a really neat solution, that enables me to cut the branches efficiently, for almost no cost and is both easy to construct and repair. All I needed was eight fence posts, a handful of nails and some scrap pieces of wood to form the frame. The basic idea is to create a rectangular frame which holds several branches, and then, using the chainsaw I can cut the whole lot into stove sized lengths in one operation.

The crucial part of the design was positioning the upright fence posts so that the distance between them allowed me to cut the branches into lengths of about 45cm. This is the optimum length of log, for use in our wood burning stove. The distance (depth) between each pair of fence posts is also important. The depth is determined by the maximum cutting length of the chainsaw. My old Stihl 023 has a 35cm bar, of which about 30cm is available for cutting. Once the depth is determined, each pair of fence posts need to be equally spaced. 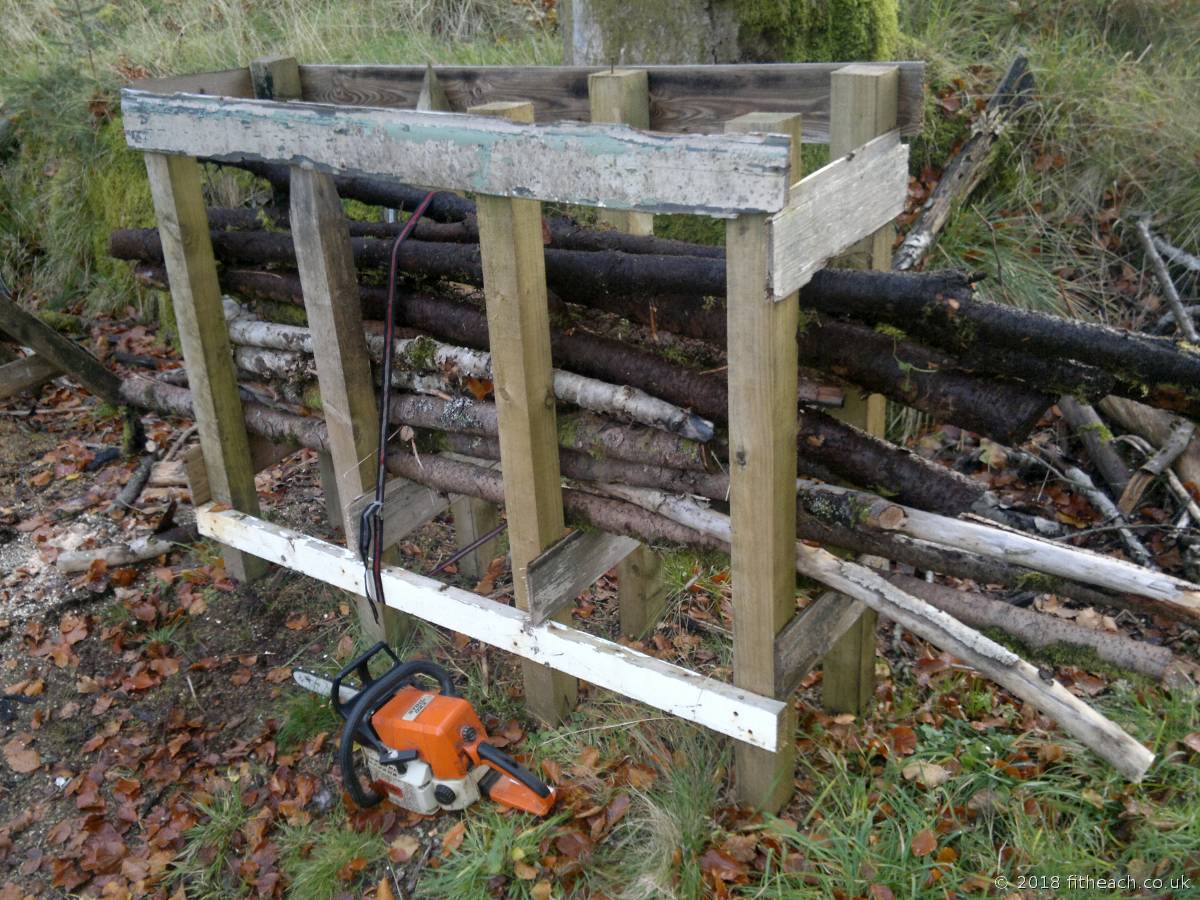 The whole construction took just over one hour. I used some scrap pieces of wood for the frame, as it won't matter if I accidently cut though them. I also made sure that there were no nails protruding into the cutting areas.

I then just fill the frame with some branches. Spruce branches work best, as they tend to be fairly straight, but with a slight curvature. Some deciduous tree branches, particularly beech, have very irregular shapes which don't fit well. On some ocassions I might fill the frame within a few minutes, on others I might do it over the course of a few days. It really depends on what wood I am processing. The great thing is, it doesn't really matter how long the branches sit in the frame. 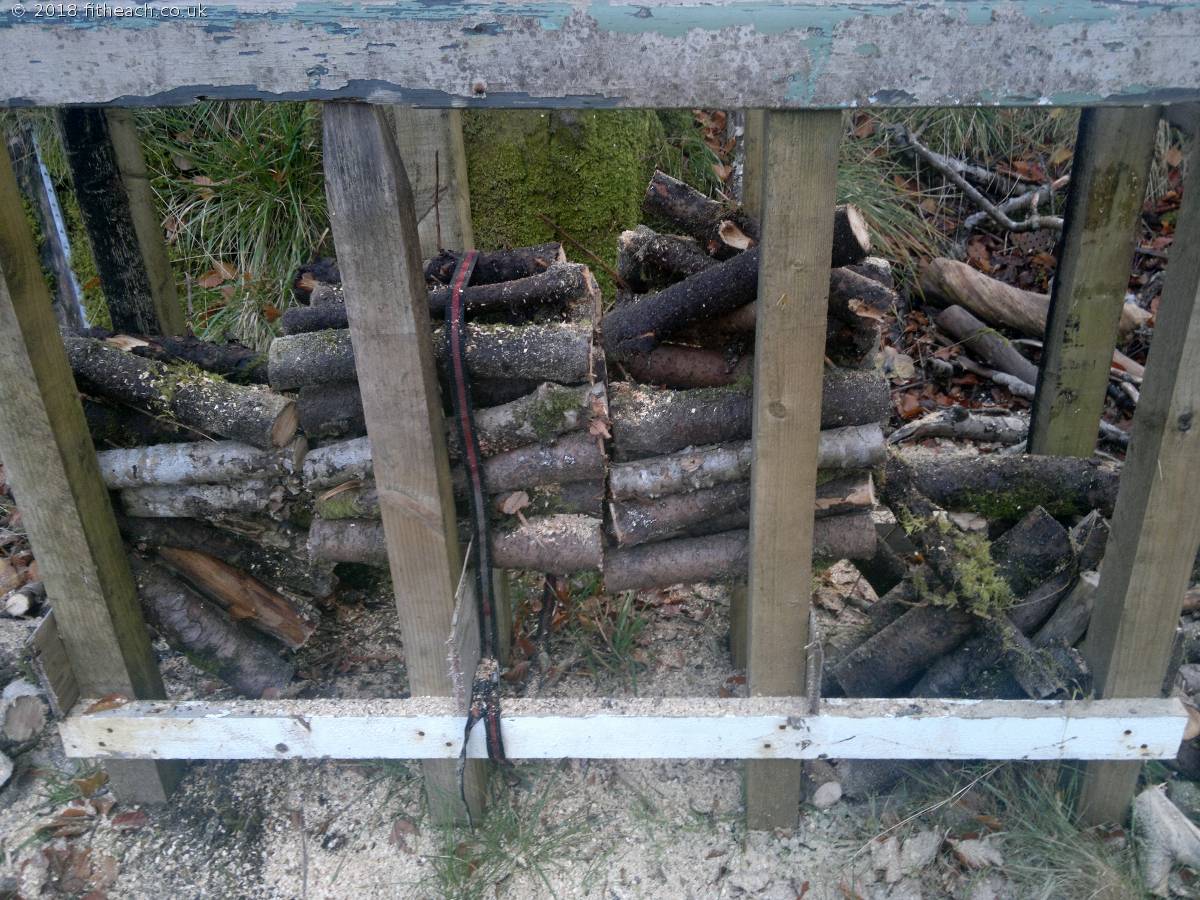 The branches after cutting into the required log lengths

Once the frame is full, I secure the branches, in the middle section, with a self-locking strap. Next, I square-off any branches that are protruding at either end by cutting them with the chainsaw. I do this, so that I don't inadvertently get some extra-long logs. Finally, I make cuts in the middle sections between each pair of fence posts, giving me my desired log lengths. The whole cutting process takes no more than two minutes.

You might find it hard to believe that it sometimes rains in the Highlands. This causes some problems for my wood processing, as it is difficult to complete the cutting and chopping of a whole tree(s) without some of it ... [Read more]

This is the first in a series of posts showing my ideal wood processing set up. We use a wood-burning stove for about three-quarters of the year, only leaving it idle during the summer months. To supply the stove requires ... [Read more]

Sometimes it is the wee details that matter. For years I had made do with various old safety helmets when cutting wood and strimming. However, last year when buying a new chainsaw I decided it also made sense to buy ... [Read more]

The Echo CS-620SX is a great pro-level, medium sized petrol chainsaw. This is my personal review after a year's worth of ownership. [Read more]